I never believed in the power of heels. Never, not once, did it occur to me to wear them to impress someone during a job interview, for example, or to set a tone during an important meeting. I like to think of the heels I have in my wardrobe as an accessory that I sometimes want to wear, sometimes I don’t. Please, certainly not out of obligation.

In other words, I am not a fan of that urban legend where, if you wear a pair of stilettos, you transform yourself into an invincible being that everyone takes seriously, who is unrivaled at work and who raises you a notch above the others. I feel an independent, open, career and emancipated woman even with women sneakers at the feet. Despite the stereotype that heels are synonymous with elegance, eroticism and empowerment, I have never thought that a pair of high shoes could make a difference in the perception that others have of me.

If it had not been understood, the formula “power equals heel” does not convince me and if I think of a female model from which to take inspiration to overturn the stereotype I just think of my former boss Carola, a real power in the office and outside. I often watched her conduct meetings with important people without being scratched by the questions of male clients who often aimed to reduce her presence during the meeting. Meetings where she always wore only elegant looks paired with a pair of sneakers. I’ve never seen on her feet anything similar to the classic pumps with heels that are often associated with people of her rank, but only colorful, comfortable and stylish models of various kinds, with an evident predilection for the American brand Saucony Originals, which I also ended up borrowing from her.

Carola never let herself be intimidated, she rose through the ranks with tenacity to manage a varied and numerous team without ever putting into practice the motto “dress to impressWhich often includes killer heels. In all of this he never lost an iota of credibility and also has always given me excellent ideas to match sneakers not only with denim or sports suits (the easiest combination) but also with dresses with floral patterns or more elegant looks. Carola has expanded the potential of my wardrobe without even realizing it, but above all she has taught me to give a damn about the imposed and dusty dress codes, read stereotypes: I will always be grateful to her for this.

The stereotype of the high heel

The heel has always been synonymous with seduction. And to crystallize the stereotype over the years there has also been TV and cinema, which have often told the story career women through sexy looks that emulate (coincidentally!) the masculine suit and extreme heel of order. The higher she rises in the office hierarchy, the more the protagonist’s heel becomes dizzying. And he becomes so because rising above the others – read: his male colleagues – is easier with 10 artificial centimeters of deadlift. As if being good wasn’t enough.

Sarah Jessica Parker, Carrie Bradshaw’s unforgettable Sex and the Cityonce told that “at the time of shooting the close-ups, the director told me that, if I preferred, I could take off my heels, because, in any case, the feet were not visible … I never did: the expression of a woman in heels is different from that of a woman without “. We disagree, dear Carrie: you would have been unforgettable even circling the streets of Manhattan with a pair of sporty-chic sneakers.

Would that pink tutu worn by the actress in the SATC theme have less influence on the costume and fashion of the 2000s if she had a pair of sneakers with high soles and laces on her feet? The answer is no: the collective imagination around his image would not have changed at all. Indeed, it would have strengthened around the idea that an evolved, career and self-confident woman does not need to define herself by adhering to a cliché. She already does it on her own, with her work and her style.

The history of fashion has evolved into a tale of conquests and freedom. Of bare flaps of skin, centimeters less, of trousers instead of skirts. But it is impossible to forget that it began with constraints and pains, with the idea that beauty “makes you suffer”. Just think of the corset, introduced by Caterina de Medici in 1500, in a few years it became the essential accessory to make a woman conform to the beauty standards of the time. The corset has undergone variations in shape and appearance over the centuries and in the 19th century it was transformed into a real instrument of torture, also capable of modifying the arrangement of the female internal organs, as the book tells. The Corset: A Cultural History of 2011 of the historian Valerie Steele.

And the heel? Same troubled beginning, same past as an “oppressive accessory”. Born as a support for the stability of soldiers in the fourteenth century, it then evolved into the indispensable accessory to look more slender with Caterina de Medici, who on her wedding day, being only 1.5 meters tall, opted for a pair of high shoes. Then, a 200-year-old hole without high-heeled shoes takes us to the court of Louis XIV in France, when it literally goes viral. A status symbol, in practice. Note to remember: in those days only men used heels, not women, who instead opted for low and comfortable models, as the culture and habits of the time required.

At the court of the Sun King, as reported by the ABC, putting on heels without permission was the equivalent of a death sentence, because only the king could decide who could wear them and who not. But really to conform and transitive some of that power that at the time was only of the male world, women have begun to wear heels (and also to make them more androgynous as well gender fluid their clothes) making them to all intents and purposes a feminine element.

At work, then, being a “girl boss” is equivalent to living on heels. Or at least that’s how cinema, TV and even a certain stereotype that puts the woman at the center of the “masculine look”, As the feminist theory introduced by Laura Mulvey in 1975 explains. In this sense, women are transformed into mere sexual objects observed by a male gaze that creates asymmetries between genders. For this theory, women are defined by their physical appearance or how they dress. And it is easy to understand what we are talking about just watching TV. The higher the woman is, in career, powerful, the more she flies on very high stilettos. Sneakers or running shoes are relegated to the moment when the working day ends, heels go to the stock exchange and women who work in the Financial Districts of the world’s metropolises walk the way home in a comfortable, easier and healthier way with flat shoes on the feet, as in a gesture of liberation that was not allowed before.

In some countries of the world wearing high heels is not only an unwritten law of the world of work, but a real formal obligation. Standard against which Japanese women have revolted, starting the movement that is called #Kutoo which aims to free women from the slavery of high heels, especially when these are not a free choice but a constraint. Yumi Ishikawa launched a tweet and a petition on Change.org in 2019 (which now has nearly 35,000 signatures) to claim her right to wear sneakers or comfortable shoes to go to work. After responding to an ad that required at least a heel 5 for a job as a hostess at an event, Ishikawa decided to say enough. And he launched a hashtag that plays with the Japanese words “kutsu” (shoes) and “kutsuu”, which instead means pain to tell everyone that being forced to wear heels to go to work is not fun, especially if it comes as a imposition from above.

The revenge of sneakers: women’s emancipation passes (also) through fashion

The history of fashion is a swing of changes, we said. An evolution that has led, over the years, to get rid of clichés and impositions that not only tried to relegate women to a lower level of society through clothes, but which were often painful. Just think about the introduction of trousers, who have become a female leader (not without scandal and resistance!) to give women the opportunity to ride without the impediment of bulky clothes or in dangerous positions (such as the “rider”).

Because, there is none, female emancipation is undeniable, it also passes through fashion.
Freeing women’s bodies from various kinds of constraints – putting on make-up, covering more or less, corsets, heels, bra, lengths of skirts and miniskirts -, leaving the individual free to choose, is a fundamental step of the ’emancipation.

Too often, in the past and still today, the dress made the monk (or the “real woman”). Fortunately less and less.
And today we have also won this freedom with sneakers, to be worn on any occasion, formal, sporty, elegant or casual and not only if you think that they have become a real cult object and an expression of one’s personality. 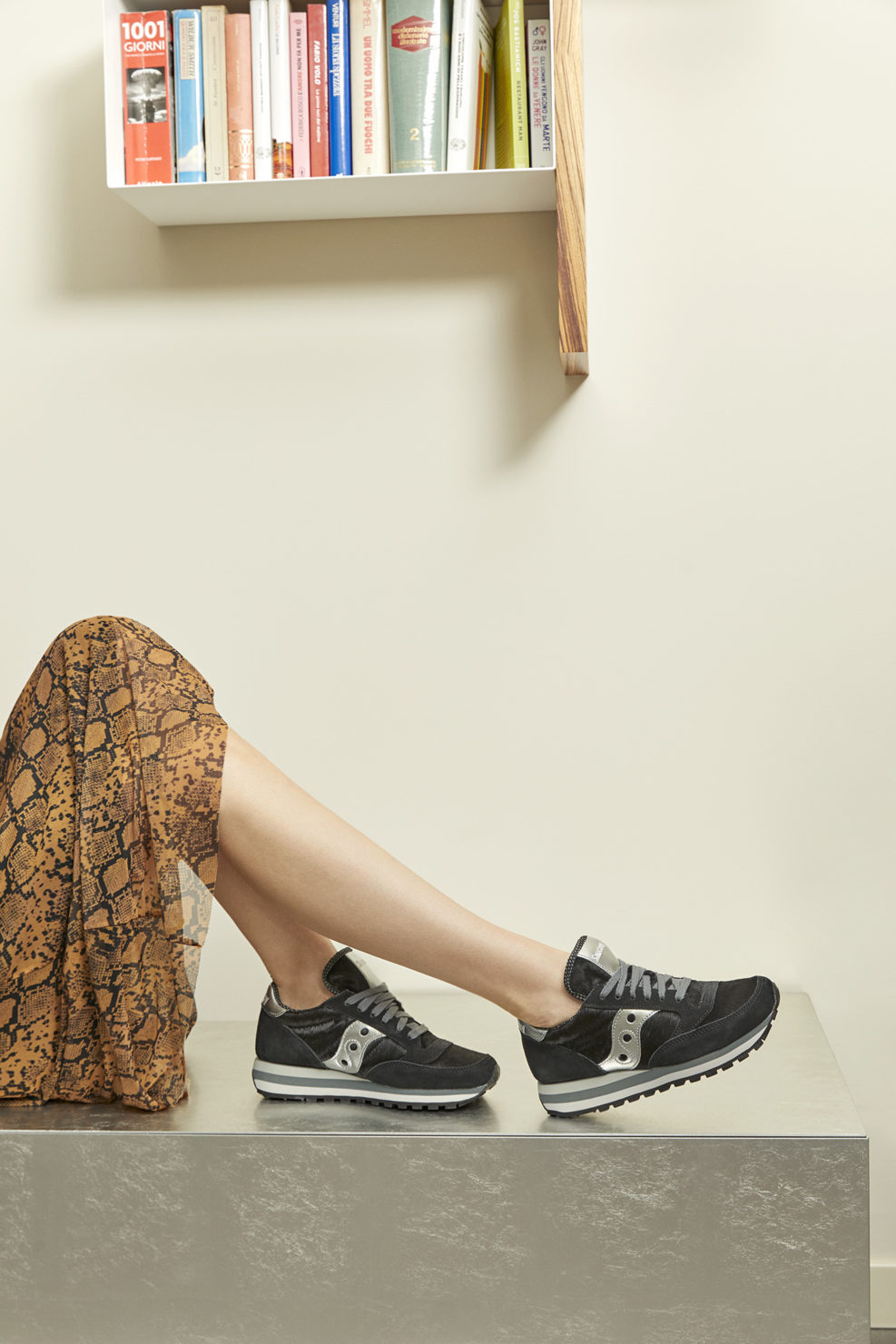 The running shoes they have made their way bullying in fashion, and not only in sports. They were born as an accessory of rupture and rebellion in the 50s, when the actor James Dean wore them combining them with the leather jacket and his magnetic gaze. Then they turned into everyone’s shoes, lifestyle and versatile models like those of Saucony Originals that my former boss Carola loved, because sneakers are worn not only to be comfortable but also to be cool. Marking, in fact, another point for the freedom to dress and wear what you want.

Wearing sports shoes at work, for an aperitif, for an important meeting does not mean not caring about your appearance, as is often thought. It is not a way to make comfort win over aesthetics but it can definitely become a tool to strengthen your personality, ignoring stereotypes and following only the dictates of a style: your own, the only one that really matters.