Passion for tattoos and piercings for some years now it has involved more and more people, so much so that in Europe alone there are about 60 million tattooed people, and the shops in the sector seem to know no crisis.

However, those who want to take a step further than the simple piercing may decide to opt for the microdermal, which is literally grafted under the skin, with a wider base, positioned under the dermis, and a visible and interchangeable part. It is a real evolution of piercing which, unlike the traditional one, can be placed practically anywhere in the body.

Microdermal, how is it done?

To apply the microdermal you need the dermal punch, a needle with a circular tip, with a plastic handle, which serves to pierce the skin; immediately after making the hole, the microdermal is introduced with forceps, slightly lifting the skin, and widening the hole so as to be able to position the plate under the dermis.

Before proceeding with any action, however, it is obviously essential that the skin is disinfected. Immediately after positioning the plate, we will proceed to screw the jewel chosen, which will be interchangeable, according to taste.

However, immediately after application, a little bit of burning, putting on a microdermal is no different than doing a classic piercing, and in any case it must be remembered that pain is subjective.

Most common body parts for microdermal

As mentioned, unlike the classic piercing, the microdermal can be applied to all parts of the body, even the flat ones, on which it is generally not possible to put the piercing, such as, for example:

The advice, however, is to choose parts that are not too exposed or subject to impact, or where the microdermal could easily become entangled in something. Remember that the microdermal is semi-permanent, and the extraction can only be performed in the studio where it was made, through the use of a particular forceps.

How microdermal is treated and the risks

No special precautions are needed to take care of your microdermal, but certainly you need to pay a lot of attention to your own hygiene, to avoid the risk of infections.

For a couple of weeks it is generally recommended to do some compresses with a saline solution, and to massage the area daily, while for the first week after application it is advisable to apply a round-shaped patch to cover the microdermal, taking care to replace it every day, after cleaning the area.

The area has to be kept constantly dry, therefore avoid using soaps or bubble baths that have chemicals or alcohol, as they may irritate the area. It is also important to avoid bumps and blows, at least in the first days, in the affected area, remembering that before changing the piercing it is necessary to wait at least a month.

By respecting these few rules, the microdermal does not present particular complications, even if recently the dermatologists of the British Association of Dermatology they seem to be perplexed about the practice of implanting titanium or stainless steel plates under the skin, claiming it can cause problems.

As those highlighted, during a congress organized in Glasgow, by dermatologist Greg Parkins, who stated that

if the plaques are not inserted well, the skin envelops them, encapsulating them and triggering an allergic reaction. We record an increase in cases of complications even after months, such as inflammation or rejection and the only solution is surgical removal carried out in a dermatological clinic authorized for small operations.

How much does a microdermal cost?

The cost of a microdermal can generally vary from 60 to 100 euros. The really important thing, however, is that it is made by a professional piercer, who respects all sanitary standards and acts in maximum safety.

8 microdermals to be inspired by

If you are thinking of making a microdermal, follow our gallery to find inspiration from some of these ideas. 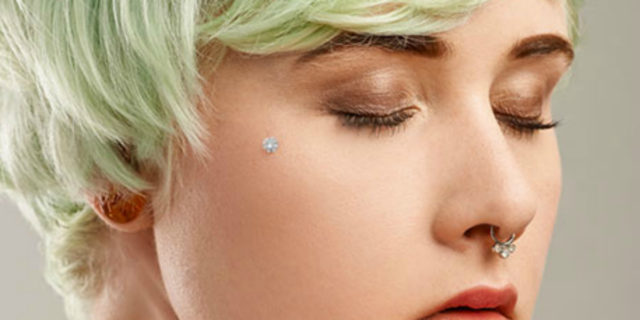