They absorb quickly without the need for laying, film or other home made spa-style maneuvers. They fight cellulite quickly, because they have a shock action. Read why they are effective!

Forget the anti-cellulite muds that require long periods of laying and a subsequent thorough rinsing! Today there are also muds against cellulite they absorb quickly and do not require rinsing. The peculiarity of these products is that they combine the shock action of mud with the practicality of a cream.
How are they used? Some anti-cellulite muds without rinsing are applied on critical areas with a light massage until completely absorbed. Others, however, may be left on all night as if they were a slimming mask. This does not mean, however, that they need to be rinsed off the next morning.

Anti-cellulite muds without rinsing: the types

No-rinse anti-cellulite muds are not all the same. There are gel formulations that give a cool effect and others, on the other hand, that work a bit like a “sauna” with warming effect. The latter are indicated only for those who do not have capillary or venous fragility problems, and in general for those who tolerate the sensation of creams that heat the body. It is precisely this thermogenetic action that has beneficial effects against cellulite, as it acts as a gymnastic for blood vessels. All to the advantage of draining excess fluids.

Usually the anti-cellulite muds are based on algae which, from scientific studies and empirical tests, have proved very useful against cellulite.
The reason? Algae are very rich in mineral salts (iron, phosphorus, copper, magnesium, manganese and iodine) which help eliminate waste accumulated in the body. It is precisely this detox action that makes algae such as precious anti-cellulite treatments.

As always, it should be specified that muds, like all anti-cellulite products, do not cure cellulite in the medical sense, but improve the appearance of orange peel and relaxed skin.
In addition to seaweed, these fast-absorbing products contain other ingredients that are effective against cellulite, such as:

How the anti-cellulite muds without rinsing work

Once absorbed by the skin, the marine active ingredients they stimulate cellular metabolism and microcirculation, favoring the elimination of toxins, to the benefit of firmness of the skin. Furthermore, being products of nature, algae muds have a biological structure similar to ours: this means that their components are easily absorbed by our body, to be used at their best.

Mud-like products to try against cellulite

In the following lines see the selection of DMBeauty on anti-cellulite muds without rinsing and other fast products with rapid absorption.

Among the anti-cellulite muds without rinsing, the blend par excellence against skin blemishes stands out, namely the Guam Algae. Based on laminaria digitata, it is a rapidly absorbed cream enriched with lipoactive nanospheres based on Coccoloba uvifera. These are substances capable of regulating the genes involved in the metabolism of adipocytes, inhibiting the formation of new fat cells and activating lipolysis. 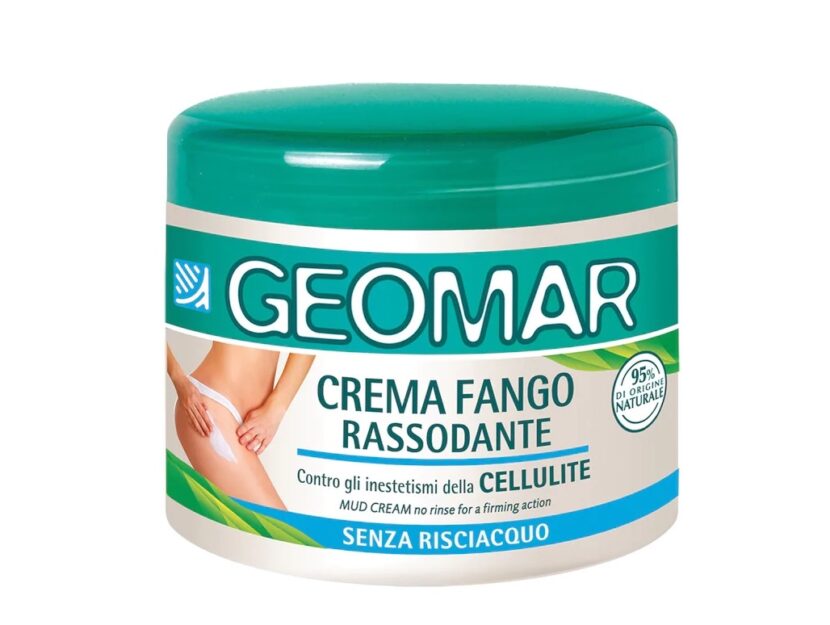 The typical full-bodied texture of mud combines the practicality of the cream, in terms of time and use. It is therefore absorbed quickly, without requiring laying or rinsing. Contains a concentrate
of ingredients such as Trio of Clays, which contributes to the detoxifying and draining action, and Green Coffee which has a toning and firming action. 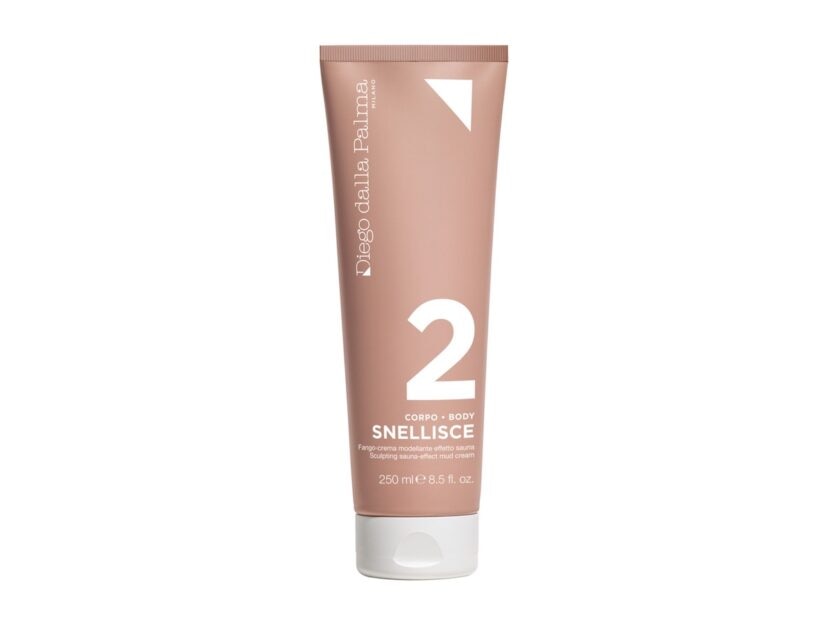 The remodeling action is given by the laminaria algae and by the fucus vesiculosus, useful to lighten the tissues weighed down by adipose accumulations and cellulite nodules. Peruvian ginseng counteracts the increase in the number and volume of new fat cells. Moreover, thanks to its absorbable texture, it does not stain skin and fabrics and is easy to use. It should be applied with circular massages, insisting on the areas of the body where there are more fatty deposits. 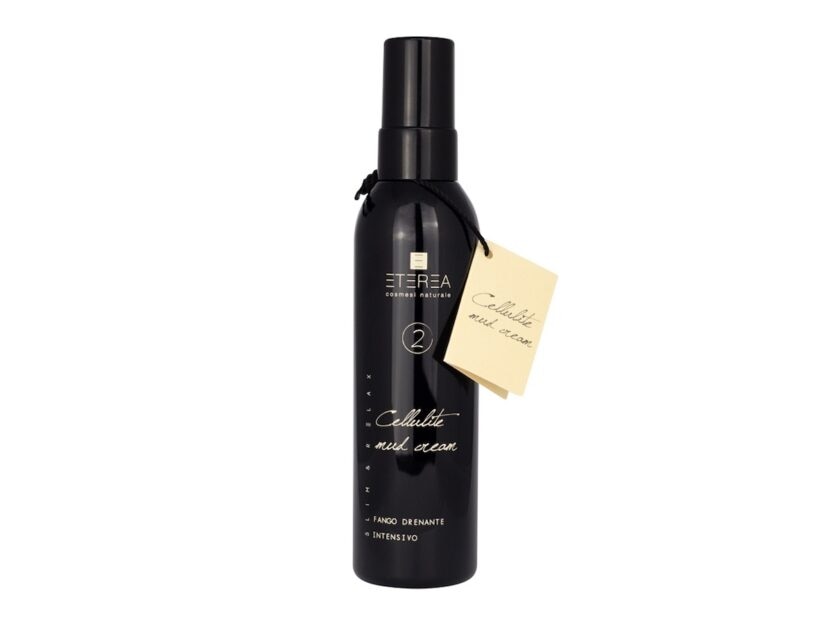 A mud with a creamy consistency, formulated with ingredients with strong lipolytic properties such as aescin and caffeine. In addition, the green clay stimulates drainage and promote the reduction of excess fluids, toxins and localized adipose accumulations, reactivating the metabolism of the cells. The synergy of green tea, witch hazel, ivy, birch, horse chestnut and arnica plant extracts improves skin tone, relieving the swelling sensation caused by the stagnation of liquids. 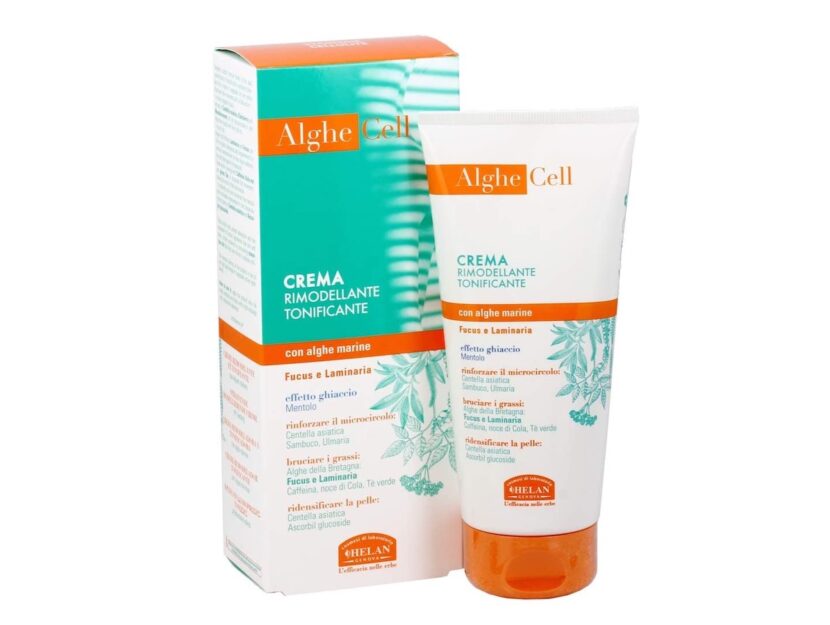 A mud cream composed of essential oils with an aromatherapy effect, active ingredients that help improve the appearance of cellulite.
The extracts of gotu kola, elderberry and ulmaria improve the microcirculation. Brittany brown algae, fucus and laminaria, favor the reabsorption of liquids. The mix of caffeine, kola nut and green tea facilitates the dissolution of fats. Finally, black pepper facilitates the dilation of blood vessels and the consequent absorption of the active ingredients. 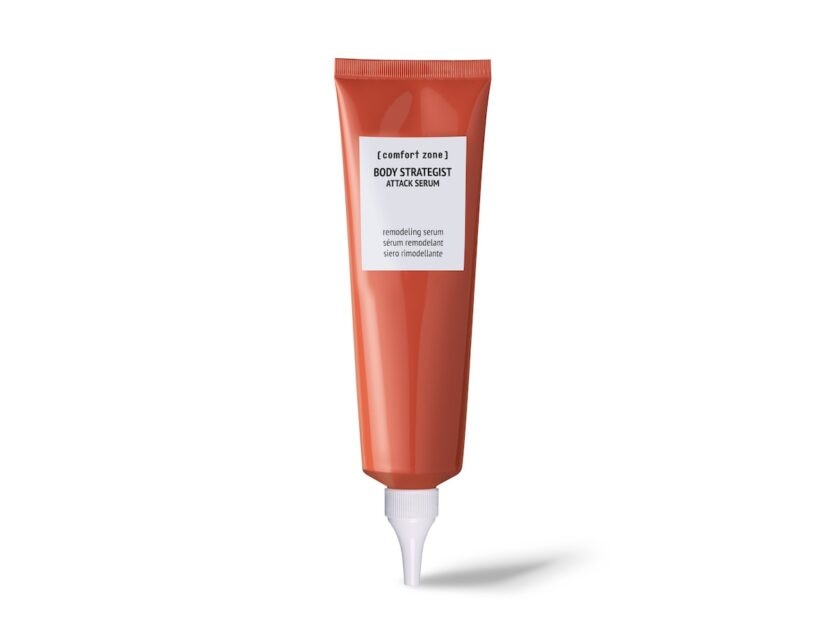 An intensive lipolytic serum capable of acting on the imperfections of cellulite. The ultra-light texture is an infusion of concentrated active ingredients that absorbs quickly. Pure caffeine concentrated at 1.5% and carnitine act in pairs, promoting the mobilization of triglycerides (fats) and promoting their entry into the mitochondria. This mechanism counteracts the accumulation of fats, as it favors the use of triglycerides for energy and thermogenic purposes. 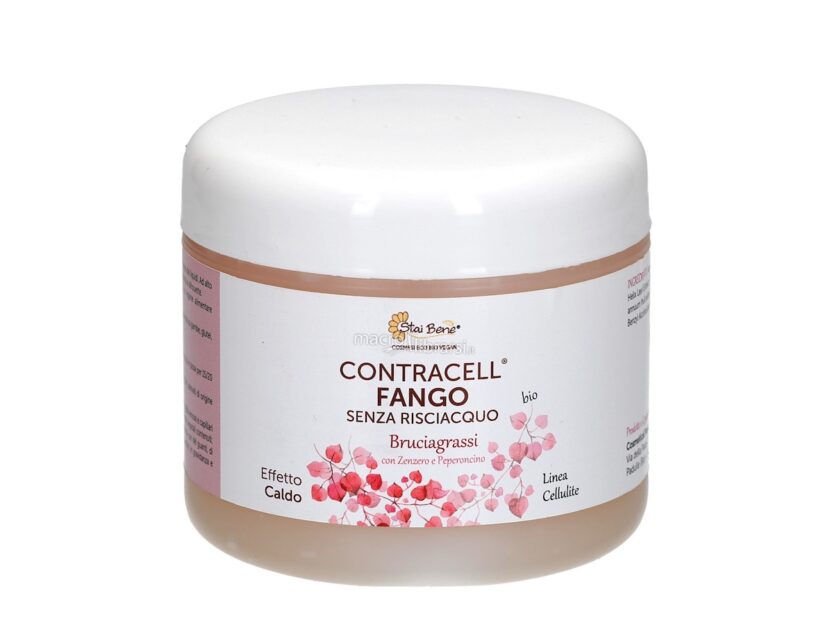 It is a no-rinse mudgel with a warm effect, suitable for those who do not have problems of venous and capillary fragility. Through thermogenesis, it acts both on edematous cellulite and therefore on the stagnation of liquids and on the stimulation of lipolytic enzymes for a reducing action. It is used as a shock treatment morning and evening, massaging deeply from the ankles to rise on the thighs, buttocks, abdomen, arms until completely absorbed. And then it is continued as maintenance 2-3 times a week, applying it on the areas to be treated and leaving it on for 15-20 minutes. Finally, it is massaged until completely absorbed. 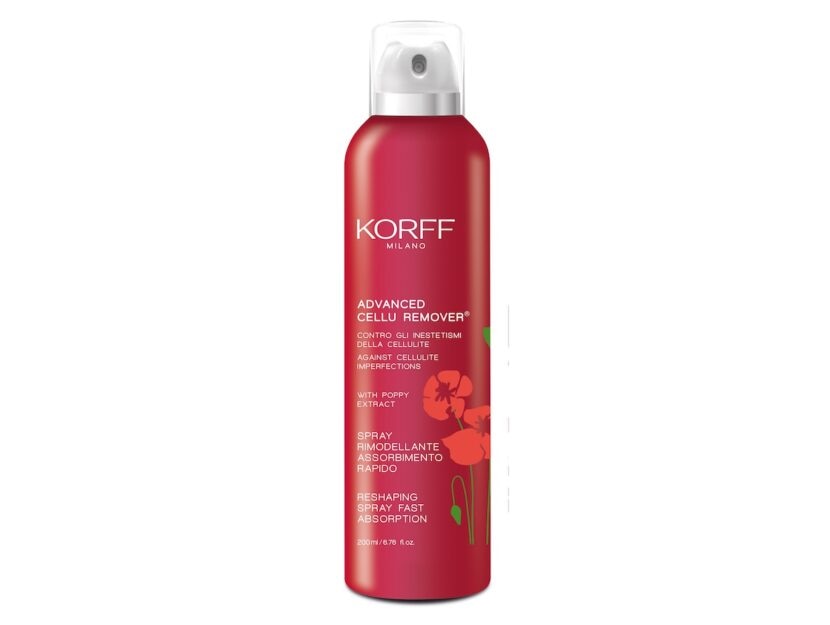 A fluid spray, based on poppy seed extract, caffeine, carnitine and ginkgo biloba, which help reduce cellulite blemishes. It improves skin firmness already after 14 days, leaving the skin smooth and hydrated. Quickly absorbed, it allows you to dress immediately after application. 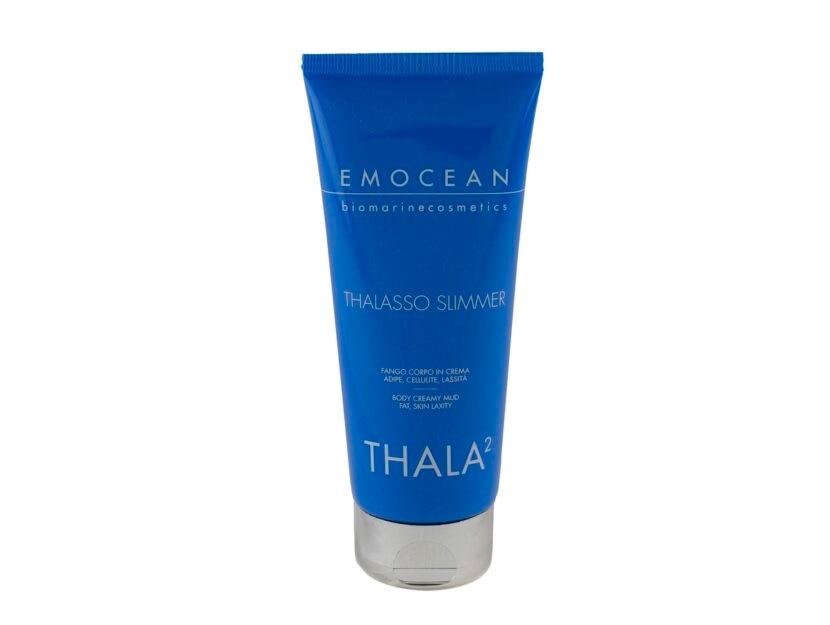 A creamy sea mud for the most stubborn fat which fights fat, cellulite and tissue atony. Not dirty and non-greasy. During the day it is used as a normal cream for immediate absorption, while at night it is possible to spread a veil and leave it on for an evident result. Contains marine silt, which is a strong lipolytic but also has a draining activity, useful against water retention. Other typical ingredients of thalassotherapy, such as asparagopsis armata, physiologically help the body to dispose of excess fat. 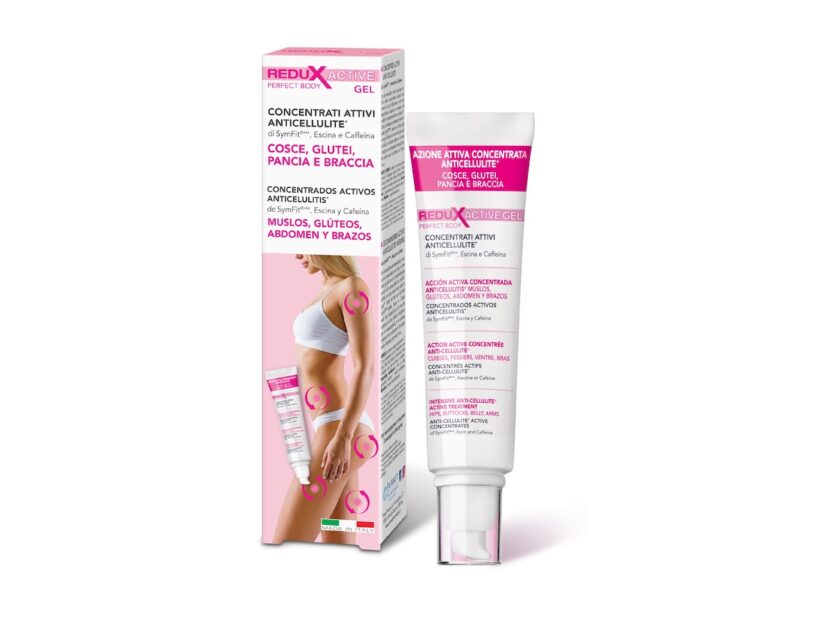 A remodeling and firming gel with concentrated anti-cellulite action for thighs, buttocks, stomach and arms. It helps to improve the aesthetic appearance of the skin affected by orange peel, fatty deposits and cellulite, preventing its reappearance and improving the tone of the skin tissues. Quickly absorbed.