They lived their golden moment in the first half of the 60s as “Beatles boots” precisely because they were sported by the beloved Liverpool band followed by an entire generation of young rebels. Since, Chelsea boots have established themselves as a great classic in both women’s and men’s shoe racks.

Without laces and high above the ankle, they are characterized by a round and large toe, generally the heel is low, while two elastic bands are applied on the side that make them easy to wear. Their style and their essence have been preserved despite the decades, even if in the latest collections there has been a marked change of direction that points to more modern and contemporary versions where the heights and the soles have exaggerated volumes.

Chelsea boots are perfect ankle boots to complete an office or university outfit, but they are also particularly suitable to combine with everyday outfits.

Chelsea or Beatles boots: what they are and their origins

They have only recently reappeared on the catwalks and among the autumn / winter fashion trends, but chelsea boots have a history that is as long-lived as it is fascinating. The invention of this boot dates back to the first half of the 1800s by J. Sparkes-Hall, better known as Queen Victoria’s personal shoemaker.

He undertook his studies and first experiments collaborating with Charles Goodyear (the inventor of vulcanized rubber) and with the English craftsman. came the brilliant intuition of applying this durable rubber to the fabric, which made the boot comfortable to wear and more practical to put on and take off.

This idea was so appreciated that the Queen herself wore chelsea boots regularly. Thanks to this exceptional testimony, the ankle boot became very popular at the time, also thanks to its use in the world of riding thanks to the characteristic fit, comfortable for riding. 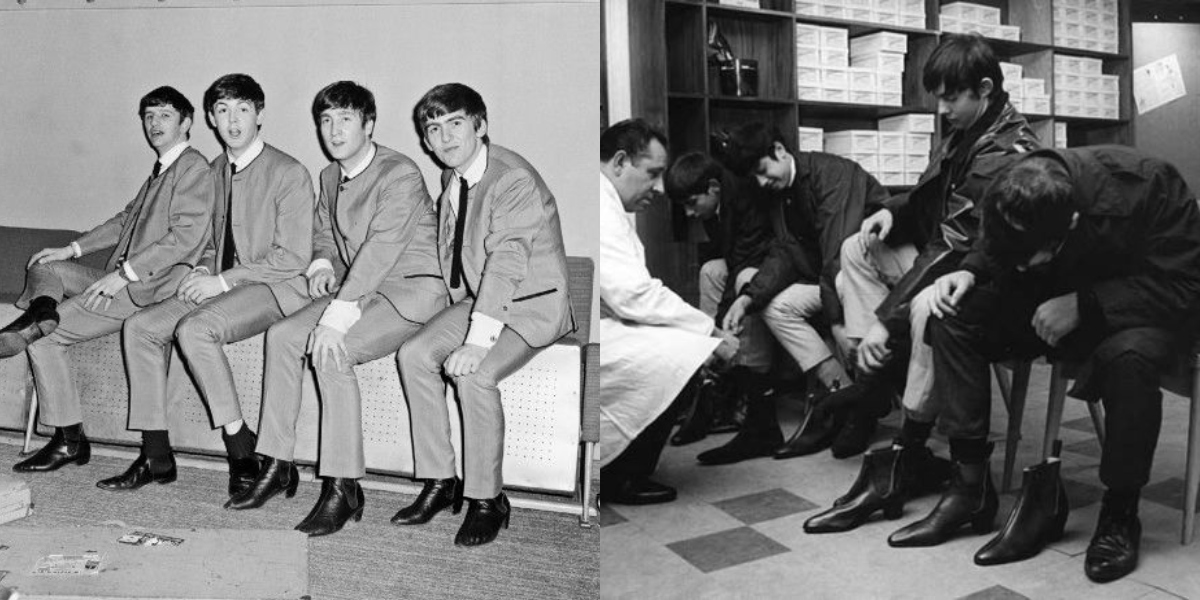 The Beatles with chelsea boots, later referred to as “Beatles boots”. Source: pinterest

Subsequently they ended up in oblivion due to the inability to innovate and keep up with the times. Driven by the enthusiasm following the economic boom of the previous decade, in the 60s chelsea boots were dusted off thanks above all to the Beatles: Paul McCartney and John Lennon were spotted buying their first pair in a London store in 1961 and, from then on, the model name was replaced with “Beatles boots”.

As a cascade effect, the fans of the band bought and began to interpret the boot: the young Englishmen combined them with their well-kept but innovative outfits, made of tailored suits, suspenders and a great passion for the music of the nascent band.

Their diffusion, which from England cleared them through customs to the rest of the world, was short and intense: they were worn on the feet of those who followed a rebellious, alternative lifestyle and put their belief in rock’n’roll. Then came the Rolling Stones and with them all new versions of chelsea boots: the upper rises up to reach the calf, while the soles become more bulky and with exaggerated volumes, just as the 2020/2021 trend wants.

The most popular types and models

From the 60s to today chelsea boots have evolved and transformed: alongside the more classic models with low sole and large and round toe, more modern and contemporary versions have appeared. 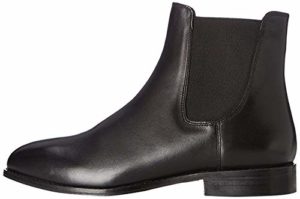 Chelsea boots will be your perfect allies as soon as the temperatures get colder. Available in 7 different colors, the Find brand realizes a model in leather, with side elasticated bands and slightly round tip. Perfect to combine with all your office outfits as well as leisure looks!

You are about to be redirected to the requested page. 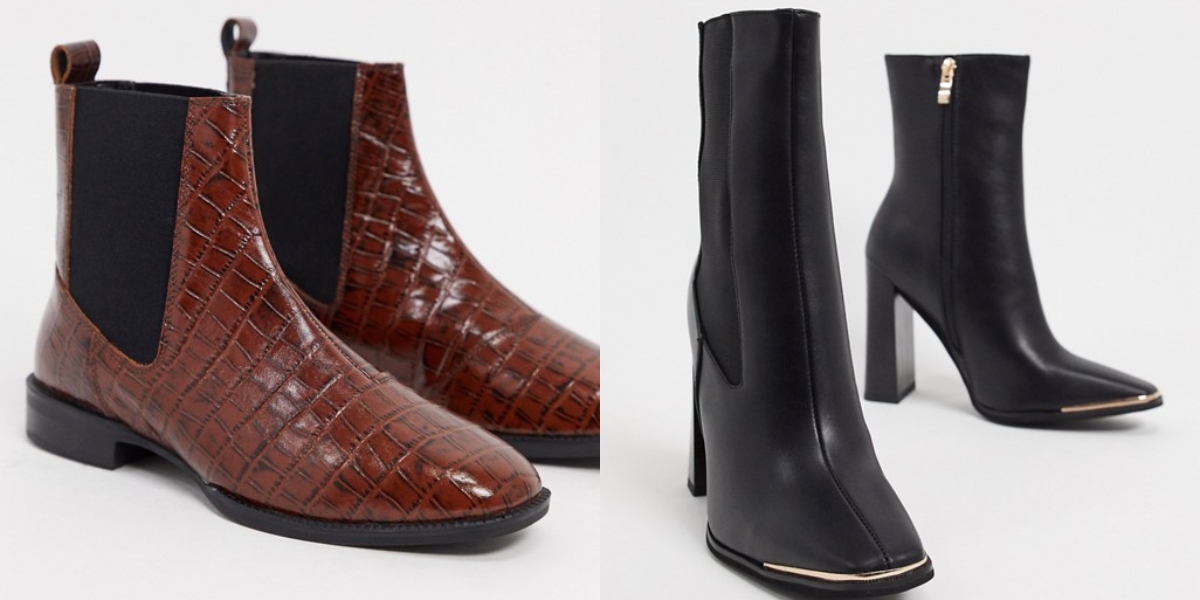 “Alyssa” is the model proposed in the new collection of ASOS Design inspired by the most classic and beloved model of chelsea boots. The brown crocodile leather effect makes them contemporary and perfect to accompany your every day outfit, the sole is thin and not exaggerated, the toe is slightly more squared and laterally there are the inevitable elastic bands, complete with a loop on the back to facilitate the fit.

The real big news of the season in terms of chelsea boots is the signature Simmi London with the “Melisa” model that offers a bold and square heel. The ankle boot has a square toe, almost sharp and is made of black leather, with golden inserts on the front. Despite being a new and innovative model, the characteristic detail of this model is not lacking, namely the elasticized side bands that are flanked by a practical internal zip. 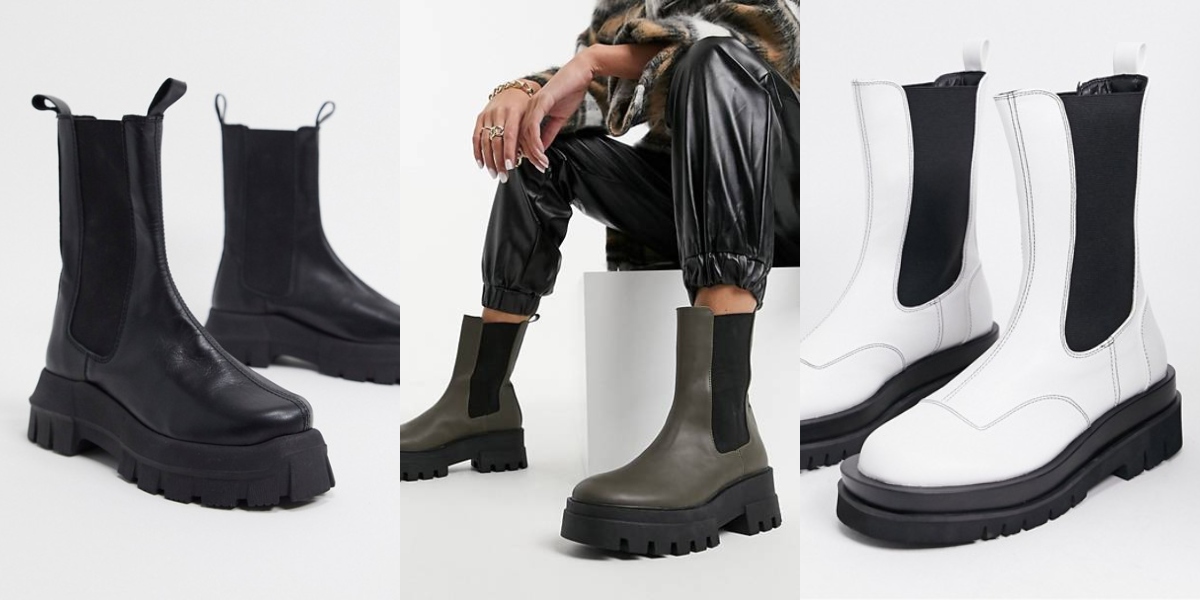 Models and types of chelsea boots: those with high leg and exaggerated sole. Source: asos

In the last year the trend of the high shaft and the extra and exaggerated para have become central and much loved. For those who want to experiment with this boot, they can start with a black leather model like “Aqum”, proposed by ASOS Design. It incorporates the classic characteristics of chelsea boots such as the lateral elastic bands but makes the sole shaped and thick and practical tabs are added on the leg.

Two-tone alternatives are the most popular: Pull & Bear creates a khaki-colored variant, with rounded toe and tank sole, while Z_Code_Z exclusively for Asos offers “Nora”, the white model with black sole and contrasting stitching.

How to combine chelsea boots? 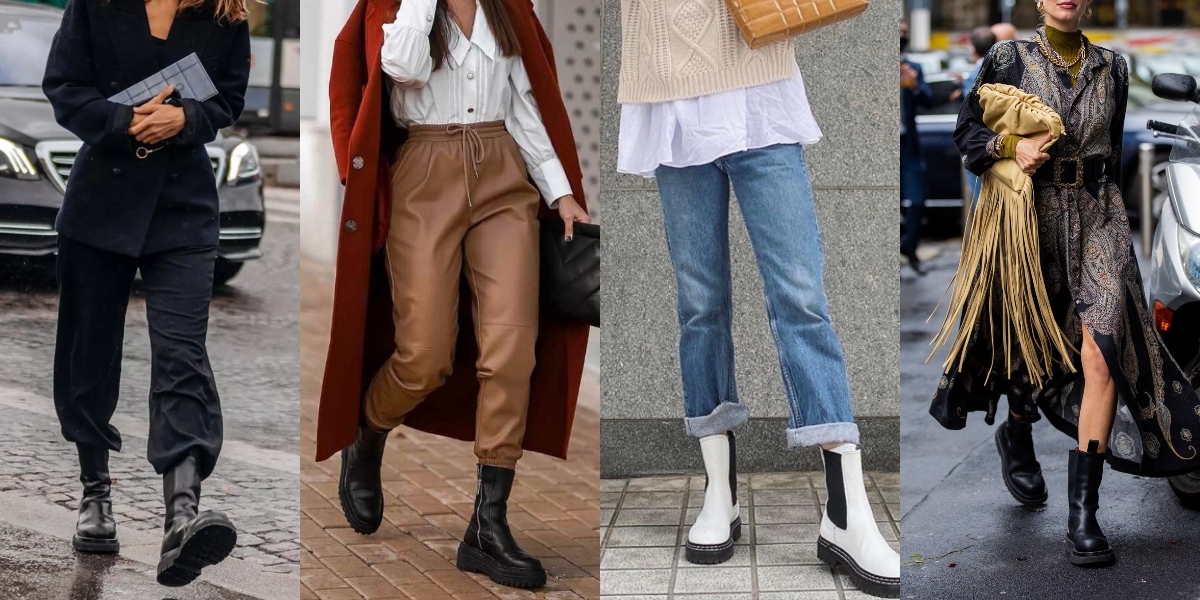 How to combine chelsea boots, looks and outfits to inspire you. Source: pinterest

All the spotlight is on them: their versatility allows you to wear them in many different ways, both during the day and in the evening. In recent years, the classic ankle model has been outclassed by the higher one and with a more or less thick tank-style sole.

Street style inspires and offers some simple tricks to be able to wear chelsea boots enhancing any outfit. If the trousers are long, they must always be tucked into the leg, but if you don’t like the effect and you manage to make some twists, the important thing is that this support is on top of the boot.

They are the footwear of the autumn and winter season precisely because with them at your feet you can cross any climatic condition, keeping the foot protected and warm. In office outfits they are perfect to play down that rigid and rigorous allure typical of these looks: the trousers of the suit are inserted into the leg to give an idea of ​​movement, the important thing is to have a longer blazer than the classic ones just to create the game of contrasts. You can combine your beloved leather trousers with a sweater or a blouse, a coat resting on the shoulders and of course Chelsea boots on the feet!

The colored versions, such as the white model, are best combined with more sober and simple garments such as jeans combined with a heavy sweater, just to give a more original touch. Chelsea boots are also perfect to complete the most elegant and refined outfits: combine them with a soft print dress or a pleated skirt, without forgetting to emphasize the waist with a belt! 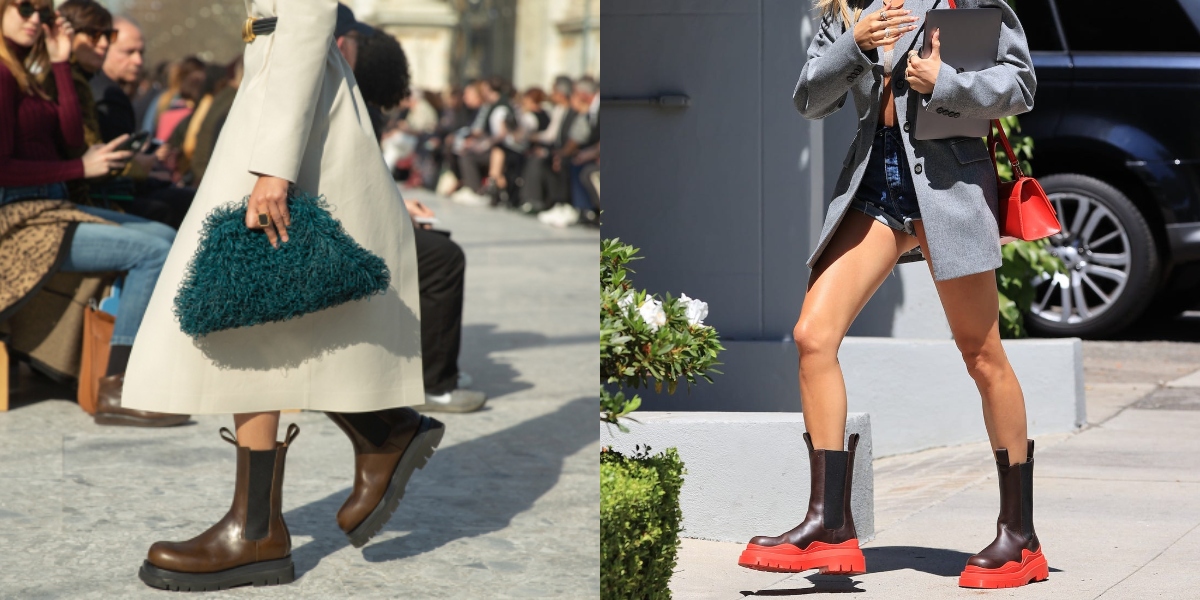 The trend spread immediately after the Bottega Veneta show and the Hailey Bieber pairing. Source: pinterest

The fashion trends of 2020/2021 want the high chelsea boots, with tank pad (also colored) and visible tabs, which help the fit. These boots entered the fashion world in a more sophisticated, contemporary and utterly exaggerated guise.

The trend was kicked off by BV Lug, a model spotted on the Bottega Veneta catwalk already in 2019: shortly after the show, many influencers and fashion bloggers wore them in their looks and immortalized them on Instagram.

But it was Hailey Bieber who sported the brown BV Tire model at the end of the summer, with black elastic and warm red para in the streets of Los Angeles that made the model jump to the top of all wish lists. 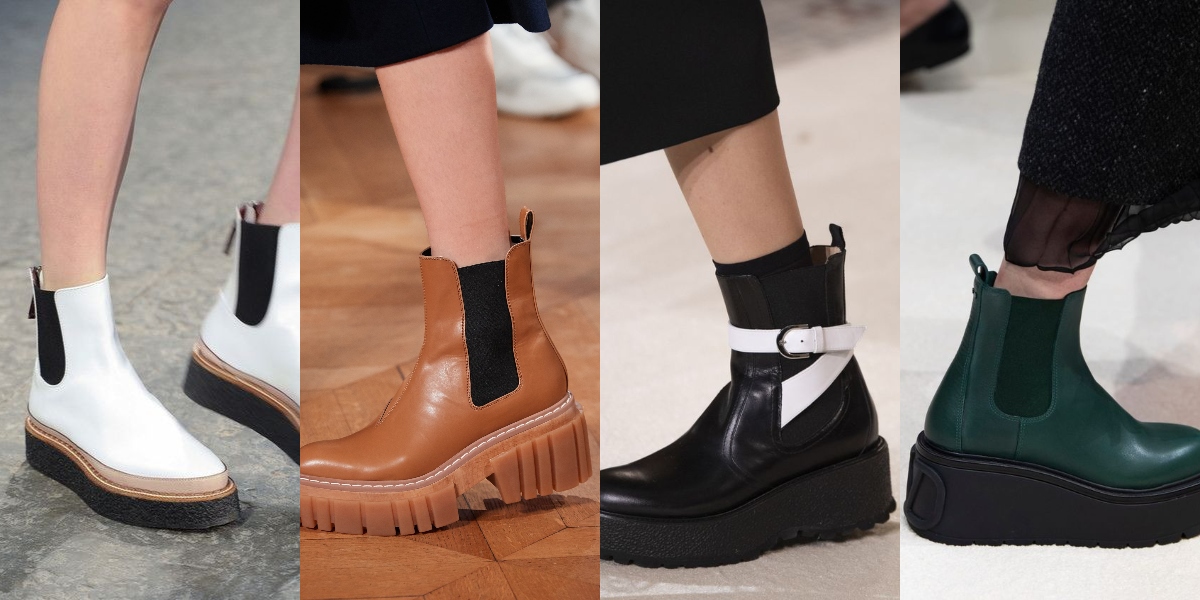 Of course, the other brands have also aligned themselves with the rising trend of the moment, and on the catwalks for autumn / winter 2020/2021 you can see different interpretations of chelsea boots. White, black and beige is the combination chosen by Antonio Marras, while Stella McCartney focuses on para chunky and a base in caramel tones, contrasted by black elastic bands.

From Giambattista Valli we saw the first element of innovation compared to the more classic chelsea model: a strap starts from the external elasticated band white that wraps around the ankle and closes with a buckle while the para, seen also by Valentino, gets bigger.