Does the skin itch, never seems to hydrate and flakes off? Most likely it is atopic. There are no real causes, but certainly many solutions. We talk about it with the expert

According to the latest estimates, atopic dermatitis affects approx 10 million people in the world. The skin itches, turns red, is so dry that no cream seems to soothe and nourish it thoroughly. These are the main symptoms. Do you find yourself? As you can imagine from the data, you are in large company. Furthermore, on social media the positive skin trend is also involving atopic-prone skin: stars, influencers and celebs show themselves naturally without foundation and with red or thickened patches.

To find out more about atopic dermatitis and how to treat it, we had a chat with dermatologist Valeria Colonna, responsible for the Puglia of ISPLAD (International-Italian Society of Plastic-Aesthetic and Oncologic Dermatology). Read the article!

What is atopic dermatitis

Atopic dermatitis is askin inflammation characterized by the formation of red patches with blisters. Itching is the primary symptom, the lesions vary from mild erythema to severe thickening of the skin, which among other things is very dry.

Eczema, atopic dermatitis and contact dermatitis are synonymous? «Not really, as all these pathologies belong to the big” family “of skin allergies, but they differ in age, onset and manifestation. Contact dermatitis, for example, occurs – as the word itself implies – following prolonged or transient contact with allergenic substances. But it is also true that whoever has one atopic-prone skin can develop over time an allergy to any substance, and therefore see the typical symptoms of atopic dermatitis appear “- explains the dermatologist Valeria Colonna. The reason? “In a nutshell, because the mechanism underlying atopic dermatitis depends on immune reactions, just like allergies.”

The main symptom of atopic dermatitis is the presence of reddish patches on dry, itchy skin. Blisters, abrasions and small crusts can also form on the patches, the appearance of which is favored by the continuum scratching resulting from itching, which occurs mainly at night and which, depending on the case, can be more or less intense.

The areas of onset of atopic dermatitis? «They vary according to age: in children, for example, it occurs mainly around the mouth, on the head (the so-called cradle cap) and on the cheeks.
From adolescence onwards and into adulthood, the parts of the face and body affected by atopic dermatitis I’m:

To diagnose atopic dermatitis, clinical observation by the dermatologist is essential. “Often some women find themselves with red and burning eyelids, attributing the cause to eyeshadow; or they notice very dry eye area, thinking it is due to the wrong cream. In reality, through a careful investigation, it turns out that the cause is a specific form of atopic dermatitis ”- underlines Dr. Colonna.

Similarly, rough, itchy patches on the outside of the elbows and knees should not be confused with atopic dermatitis. ‘The latter are usually manifestations of the psoriasis, which is a different skin disease, and which involves areas opposite to atopic dermatitis, although there may be variants of the latter. Furthermore, both pathologies can coexist in the same subject, but it is not so frequent ».

The cause of atopic dermatitis is idiopathic, a term that in medicine indicates that its true origin is unknown. “It’s the classic constitutional pathology on a genetic basis: behind it there is always a family history of atopic-prone skin. Particularly sensitive and dry skin is usually inherited, which can suffer from various forms of dermatitis, without real causes. Surely there can be triggers such as stress, seasonal changes, humid weather, frequent washing, etc. ” – explains Dr. Colonna.

To be precise, the onset of atopic dermatitis is due to the lack of filaggrin, a protein that helps keep the skin intact, acting as a glue between the superficial cells of the epidermis. To favor its development is also thealteration of the balance of the lipid layer which protects the skin from external aggressions.

Emily Bador is a British model influencer, an exponent of the body positive movement who often shows her imperfections on social media, including atopic dermatitis.

When to go to the dermatologist

If the skin is very red, itchy, has thickened patches, it is advisable to contact the dermatologist. Often what sets off the alarm bell is the feeling that no cream soothes the itch. “Let’s not forget that atopic-prone skin can easily become inflamed, so it is necessary to intervene with specific, highly soothing treatments”.

How to cure atopic dermatitis

Treatments for atopic dermatitis vary according to the extent of the disorder. «It goes from emollient creams, in milder cases, at cortisone therapies, in the more severe ones. It is important to point out that there are different classes of cortisone which only the dermatologist can prescribe depending on the severity of the lesions. It is usually formulated in the form of ointments to be applied locally, and only when the symptoms are really severe. Sometimes they disturb daily life and even sleep ”- explains the dermatologist.

With cortisone it is do-it-yourself not recommended and abuse. The reason? “If it is true that it is a cure-all against dermatitis, as it is a powerful skin anti-inflammatory, cortisone induces addiction”.

Mild atopic dermatitis, on the other hand, should be treated with highly humectant creams that keep the skin’s moisture, restoring the protective barrier. «Nourishing creams based on are fine urea (to reduce peeling), glycyrrhizic acid (to stop itching), vitamin E, lipids and ceramides (to feed), zinc oxide (to soothe) “. Better if they are fit cream or conditioner, as they nourish intensely. Instead, avoid dry oils which, if applied to dry skin, can dehydrate it even more.

«For the shower are suitable washing oils and all oil-based detergents, as they are free of soaps, surfactants and foaming agents ». Ideal for face and body, wash by affinity, that is “removing” the impurities, thanks to the lipid and oily molecules, compatible with the hydrolipidic layer.

And are the “common” hand or body creams okay? «In the inflammatory phase of atopic dermatitis they are contraindicated, both because they often do not contain anti-itch or soothing active ingredients, and because the presence of perfume could over time favor the development of allergies. let’s not forget that scratching to relieve itching exacerbates the lesions“.

German fitness youtuber Carys Whittaker was the first in 2017 to denounce the fake perfection of social media, showing her face mottled with dermatitis.

Other useful tips for atopic-prone skin

In addition to specific creams and cleansers, there are some other precautions to be taken against atopic dermatitis:

The specific products for skin affected by atopic dermatitis are formulated with emollient active ingredients, which restore the epidermal barrier, and stop itching. Some are clearly indicated as “anti-scratch“. On the market there is a wide range of creams with a more or less dense consistency, and always comfortable. Both for the face and for the hands and body. In addition, they cover all phases of atopy: from acute to those milder, therefore to be used as maintenance.Not by chance, they can be associated with any cortisone therapies prescribed by the dermatologist.
Look at the selection of DMBeauty!

(The article continues after the gallery) 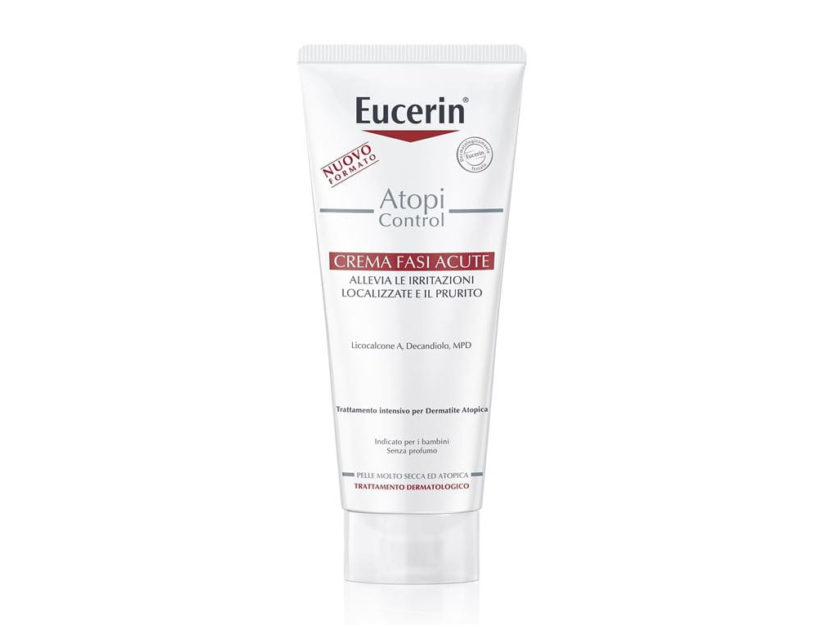 AtopiControl by EUCERIN
Acute Phase Cream for atopic dermatitis formulated with a complex of active ingredients: Licocalcone A with soothing action, Decanediol with antibacterial action, Mentoxipropanediol, a refreshing anti-itch compound.
In the pharmacy and parapharmacy. 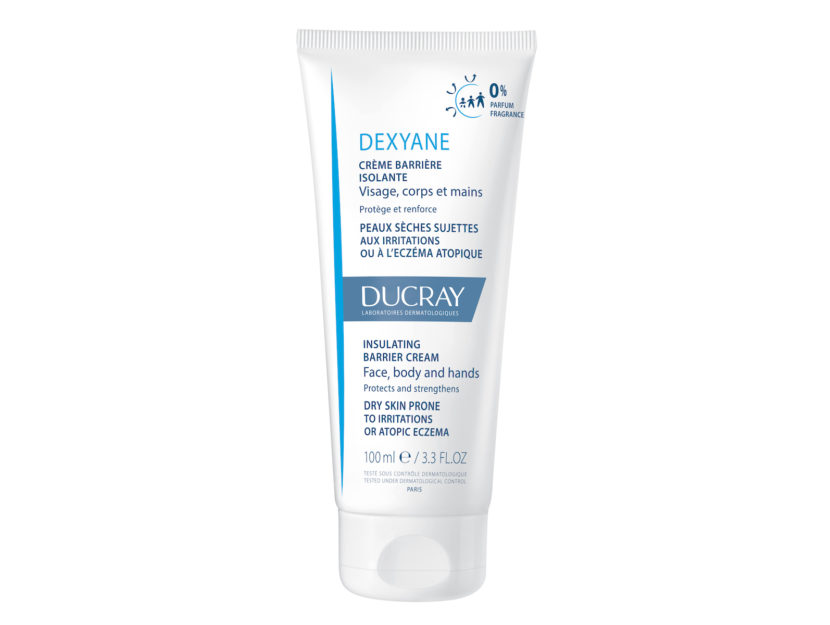 DEXYANE, DUCRAY insulating barrier cream
It isolates and protects atopic-prone skin from aggressions of professional or domestic origin. The formula contains among the assets the
Isoleucine which limits the adhesion of bacteria responsible for skin inflammations.
In the pharmacy and parapharmacy. 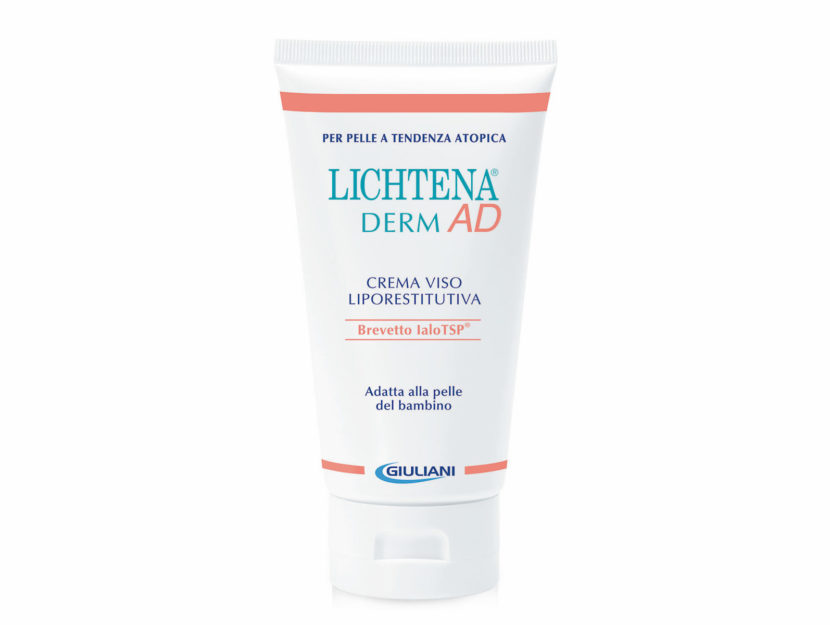 DermAD Face Cream Liporestitutivto of LICHTENA
Contains a Biomimetic Peptide (CG-TGP2) capable of inhibiting the activity of substances involved in the symptoms of atopic dermatitis, such as erythema, itching and severe dryness.
In the pharmacy and parapharmacy. 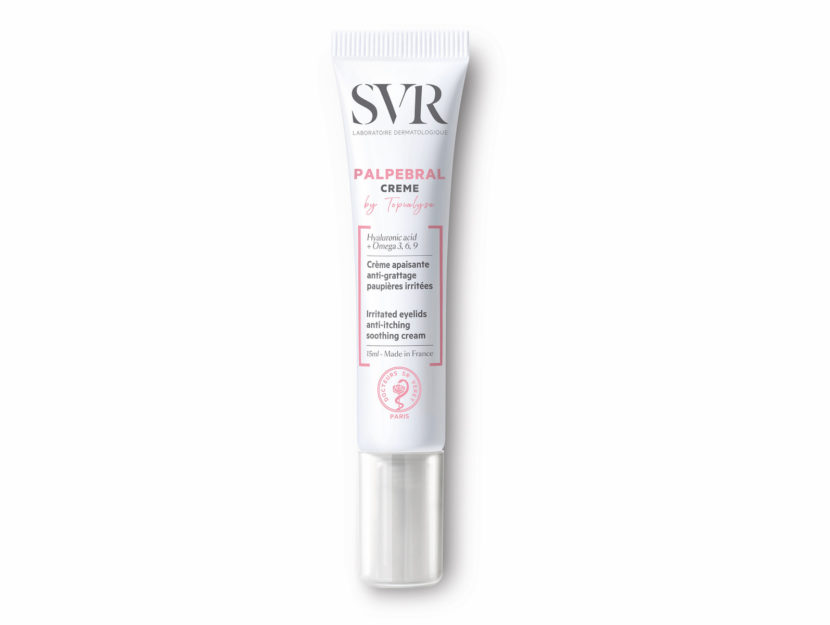 Palpebral by Topialyse from SVR
Eye contour cream for atopic-prone eyelids. Contains glycyrrhizic acid, an anti-itch active, calms and soothes irritations.
In the pharmacy and parapharmacy. 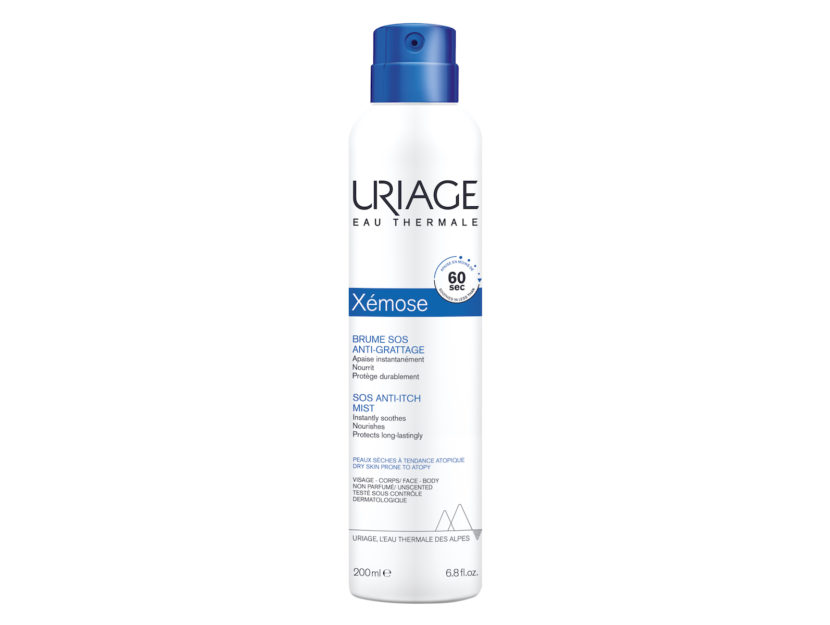 Xémose Anti-Itch Soothing Spray by URIAGE
Enriched with Illipe Oil and Shea Butter, it restores the skin barrier and softens the atopic-prone skin.
In the pharmacy and parapharmacy. 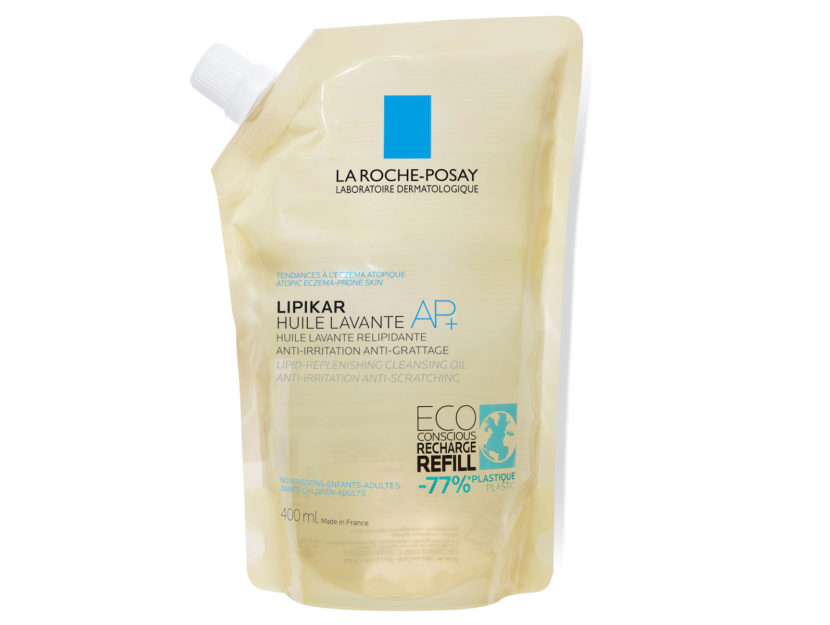 LIPIKAR Huile Lavant AP + by LA ROCHE POSAY
In the formula there is the active Aqua Posae Filiformis, indicated to rebalance the microbiome and restore the functionality of the skin barrier
In the pharmacy and parapharmacy.

DERMEXA, Emollient Cream by AVEENO
The patented Triple Oat formula contains essence of Oats, Colloidal Oats, Oat Oil and Ceramides. Oats have the ability to attract moisture from the atmosphere to the skin and thereby strengthen it
natural skin barrier, while Ceramides increase the skin barrier capacity of
retain and preserve hydration for 24 hours, relieving itching.
In the pharmacy and parapharmacy. 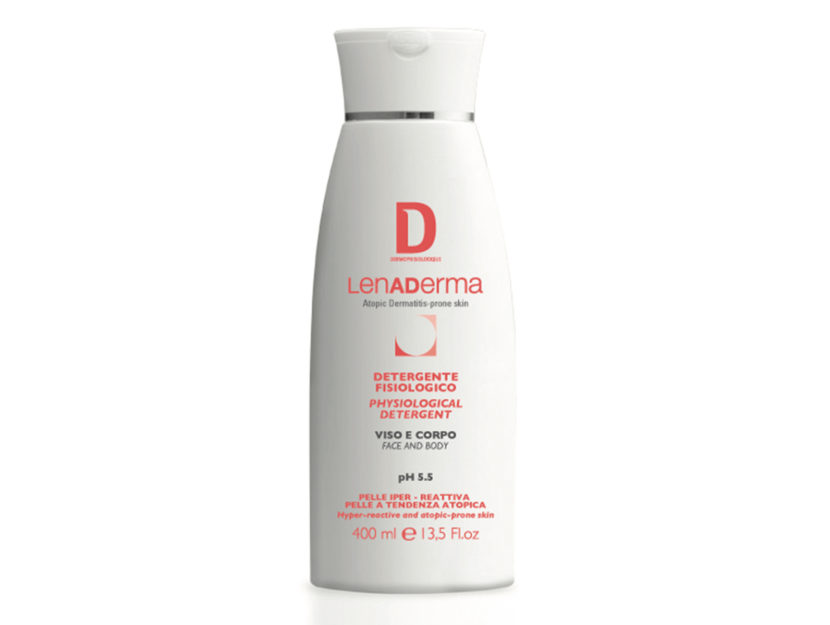 At this point, given the widespread worldwide spread of atopic dermatitis, you may be wondering which celebs suffer from it. The actress Elle Fanning she is the last one who showed herself without make-up on her personal instagram. And then there are the colleagues Kerry Washington and Catherine Zeta-Jones who have stated several times to suffer from it since they were little girls. Again, the singer Adele she claimed to have had her first severe eczema after becoming a mom. IS Brad PittDuring the filming of The Curious Case of Benjamon Button, her skin was so full of dermatitis patches that she prompted her co-star Cate Blanchett to lend her a powerful anti-eczema cream!