The 1980s were not just the decade of the cult of personal success and efficiency, but also the golden age of marketing: thanks to globalization and greater segmentation of the offer in every field, consumerism becomes a global phenomenon and advertising is becoming more and more pervasive.

The culture of appearance is characteristic of the 80s fashion and it is also accompanied by the obsession for activity and physical fitness, pursued in aerobic workouts, where fluorescent colors and technical fabrics begin to make their way even in the looks of all days.

The shoulders of the dresses widen and bulge to make way for the new model of career woman, fierce and determined as she enters the world of work. The hair becomes teased, the make-up makes the eyes the protagonists and the accessories range from the sports world to the logo mania, a trend absolutely in vogue also in 2020.

The currents and trends of 80s fashion 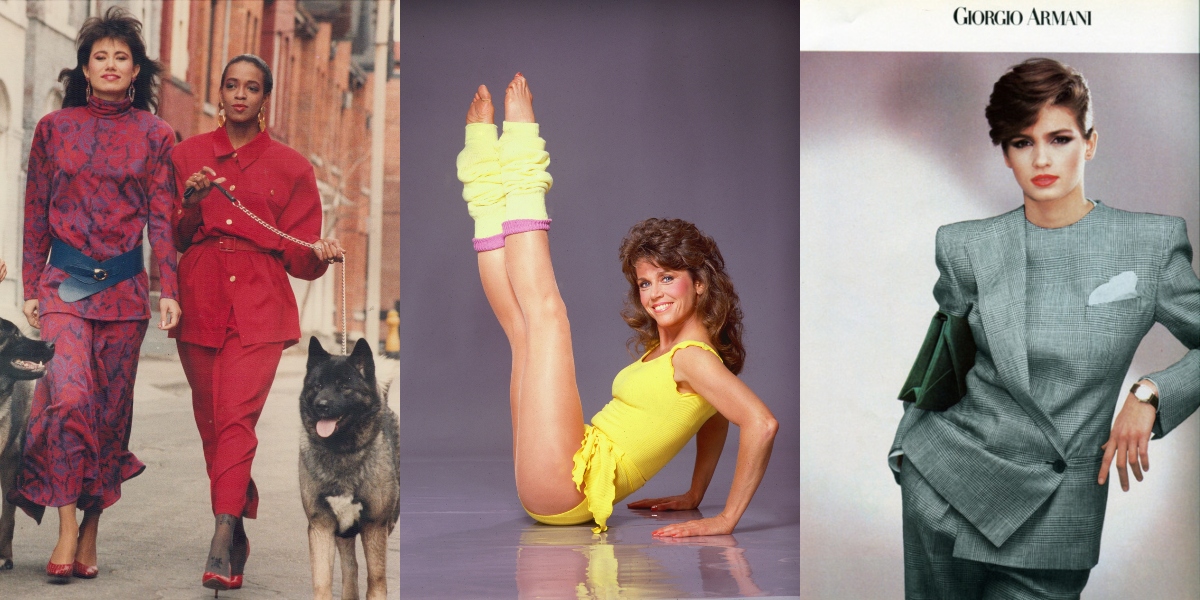 The years of Power Dressing. Impossible not to mention the progress that the feminist movement made in those years, changing the social reality of women leading them to obtain the approval of laws regarding abortion, gender equality at work and divorce. Fierce and determined they make their way into the world of work wearing suits in which shoulders and trousers were highlighted to reveal the silhouette.

Sport is never enough: aerobics and athleisure. The fitness craze takes hold in this decade. Jane Fonda is the spokesperson for this segment and becomes popular thanks to the video tutorials in which she practices this discipline. Of course, clothing also aligns with this current, and here it is Lycra bodysuits appear, leg warmers on both calves and arms and leggings, all strictly in technical and fluo fabrics.

The ready-to-wear. The best economic conditions of the decade of the Eighties allowed ready-to-wear fashion to expand everywhere. The 80s fashion is deeply marked by Milan which, in this decade, is affirming itself as the capital of fashion and during the Milanese fashion weeks some Italian designers such as Giorgio Armani and Gianni Versace become famous. Thanks to these two brilliant and avant-garde minds, Italian prêt à porter is transformed into a signature of luxury all over the world. 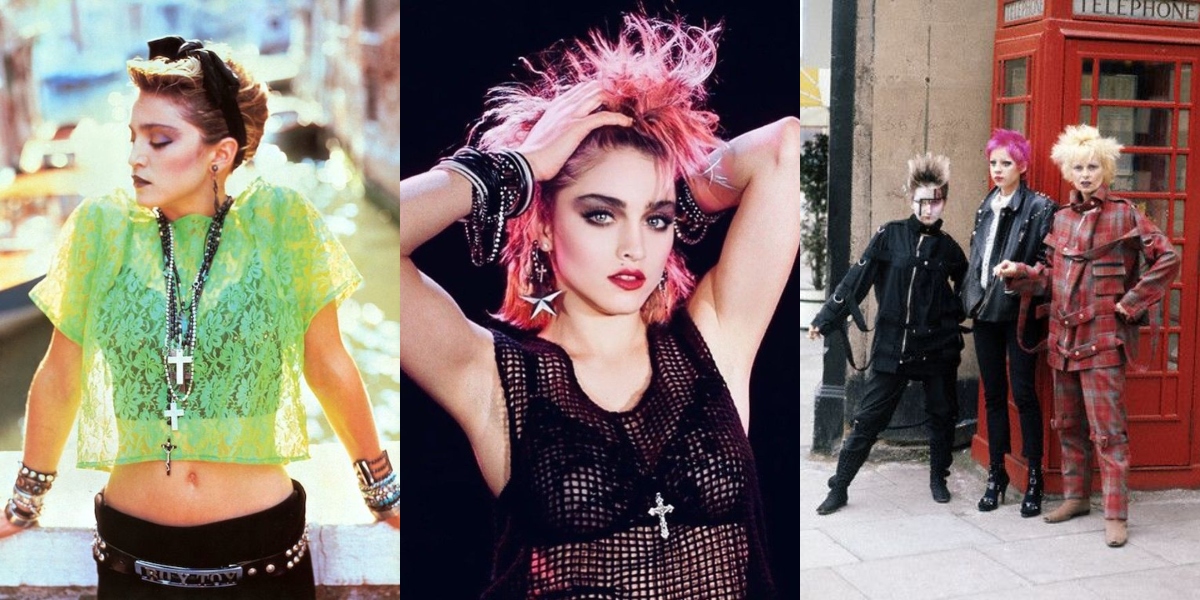 Madonna, the Sex Pistols and the punk genre. Source pinterest

I’m a Material Girl: Madonna. Thanks to its unmistakable ability to transform and renew itself, in this decade the unforgettable Madonna was established. Her hair was curled and frisé, she wore studded black leather jackets, often in an oversized version with sneakers or declined in more unusual materials.
Not to forget the iconic large and colorful earrings, the gloves in leather, wool or lace always with the fingers cut. Her long pearl necklaces were enriched with religious symbols such as crosses, with the intent of staging a look that had nothing to do with being a good girl with good manners, but absolutely bad girl.

The chaos of punk. Towards the end of the 70s the punk current emerges, a term that was born to define a genre of noisy rock music composed of experimental sounds. The most influential group of the decade were the Sex Pistols, a band that scandalized England and the whole world: they radically changed the image of this musical genre, transforming it into provocative and disorderly.
The manager of the band, Malcolm McLaren, in those years began a relationship with the very young designer Vivienne Westwood, and the couple helped define the essence and punk style behind the phrase “When in doubt, Overdress!” (if in doubt, better exaggerate!).
The key words around which the collections are developed are to upset and exaggerate: the garments and accessories evoked the imagination of bandits, of Victorian-inspired women with torn dresses and chains combined with leather garments with biker pins. 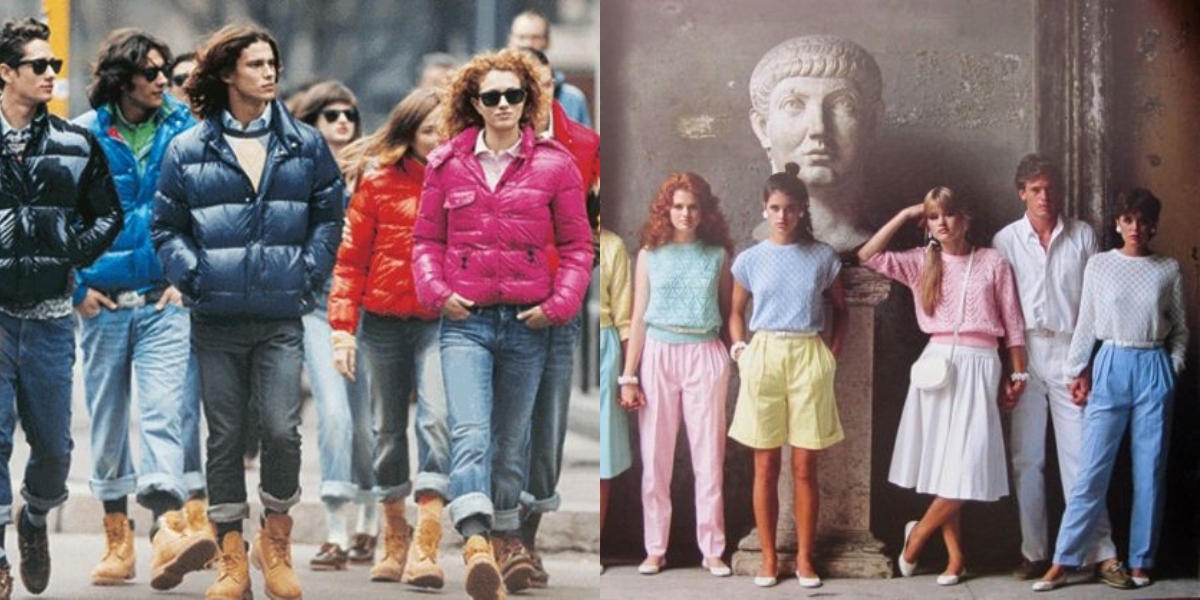 The paninari of Milan and the preppy style in the USA. Source: pinterest

The paninari of Milan. In Italy the fashion of the 80s was marked by the paninari movement, initially born in Milan and then spread throughout Italy.
Style based on consumption, which then involved every aspect of everyday life, is characterized by an obsession with absolutely designer clothing: strictly expensive and branded, the paninaro wore padded jackets (often also sleeveless) by Moncler, Timberland boots or the first models of boat shoes which were joined by super sporty models such as colored Superga or Vans, Levi’s jeans or in velvet mille Stone Island ribs, checked shirts and colorful sweaters.

And preppies in the US. Alongside the more sporty and casual clothing of the 80s fashion, the “preppy” category also makes its way, the unmistakable look of all the Americans who attend the prestigious universities of the Ivy League.
Conservative and bon ton, the preppy style is not a fashion but more a philosophy of life: the term derives from the abbreviation of “preparatory school” precisely to indicate the uniforms of American students who were preparing to attend college. The classic polo shirt combined with a cardigan or blazer, the capri-cut trousers and the moccasin were the men’s uniform, while the women’s one included skirts with checked patterns combined with tights of every color or chino trousers, V-neck sweaters and typically tennis-inspired, cardigans with buttons and, to complete the look, ballet flats or minimal heels.

Training and Dynasty: clothing and clothes 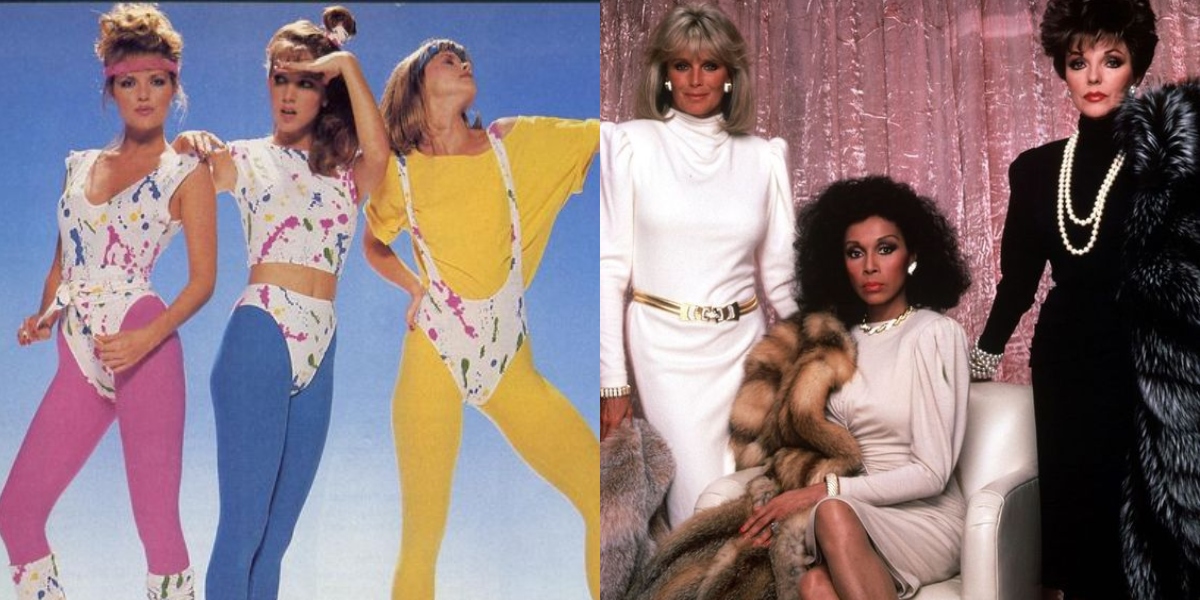 Known in history for oversized jackets and oversized shoulder pads, the 80s in the collective imagination are associated above all with Power Dressing. In this decade, women enter the world of work and are increasingly numerous.

Fashion proposes a tracing of the most classic male suit, making it, however, fashion, glamorous and absolutely fierce, just like the spirit of women in those years. Consisting of a skirt or trousers, it is characterized by a strictly oversized jacket and shoulders. The craze for fitness takes hold in this decade: the high-cut Lycra leotards worn over the leggings are tinged with fluo and bright colors.

Yes why 80s fashion is not afraid to combine bright and contrasting colors: the most popular shades are fuchsia and turquoise, electric blue, acid green and ends with fluorescent yellow.

The perfect shape obtained after hours of training is shown off in snug and absolutely provocative clothes. Thierry Mugler and Azzedine Alaïa are the designers who bring this style to the scene, but it should also not be forgotten the influence of the TV series of those years: Dynasty makes this glamorous style popular made up of brilliant looks, studded with sequins with plunging necklines and slits, shoulder pads and jewels to flaunt.

The other side of the coin, on the other hand, is expressed with the most casual clothing for free time, which adopts sports garments and fabrics in everyday outfits. Sweatshirts, cycling pants and sneakers blend with jeans, polo shirts and shirts to give life to athleisure looks.

In recent years, the logo mania begins to make its way and, with her, the first designer bags also appear. The favorite models alternate between soft and practical shoulder bags, very elegant clutches and backpacks and travel bags assert themselves as an alternative to the more classic shopper. The colors are bright and eye-catching, the metallic leathers and, among the typical elements of this decade, the first chains also appear.

Among the most sought after and desired brands is the made in Italy of Fendi and Gucci which is also flanked by Chanel, thanks to the modernization of the brand made by Karl Lagerfeld starting from 1983. Impossible not to mention the birth of the iconic Hermès “Birkin” in 1984, inspired by a less formal and rigorous style.

As for footwear, in your free time you opt for sneakers and moccasins, while the elegant shoes of the 80s fashion point to pointed shapes, thin heels and metallic finishes. The accessory that best describes the Eighties is definitely the belt: high and with a maxi buckle in the center, is combined with dresses, sweaters or cardigans to enhance the waistline and highlight the padded shoulder straps. 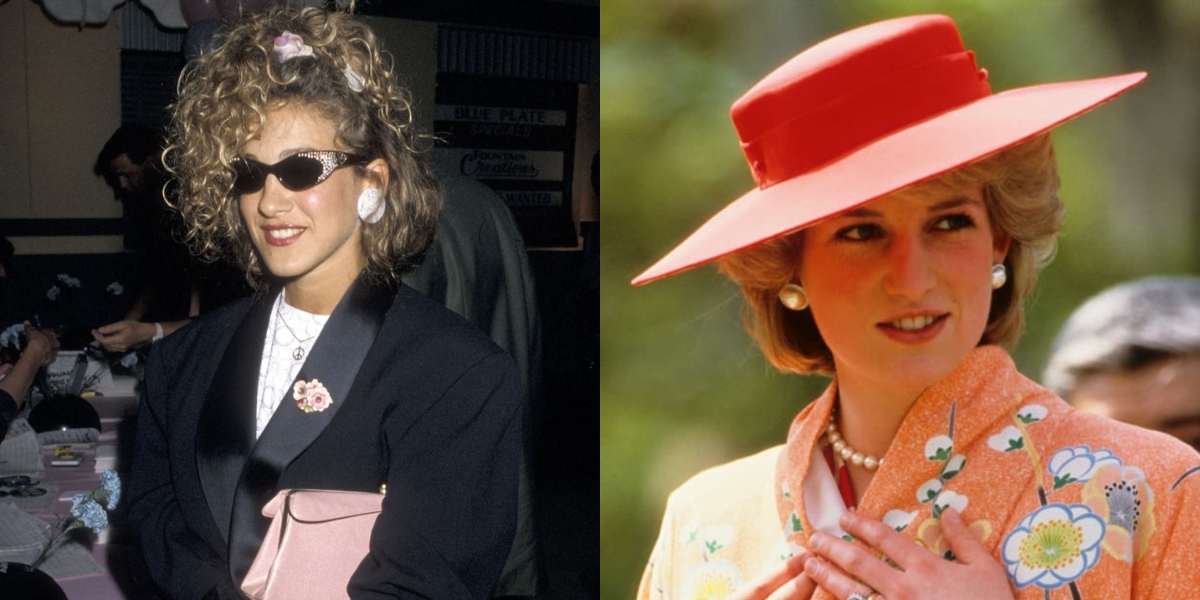 The jewels are absolutely showy: yellow gold is preferred, combined as a contrast with pearls and stones of every color and nuance. Fashion earrings are button or hoop earrings. The macro versions of the hair bows also influence the rubber bands (the famous scrunchies), the headbands and the colored barrettes that pop out between the cottoned manes.

But the 80s fashion also includes tennis-style terry headbands, alternating with the decidedly more elegant and formal proposals of wide-brimmed hats, to be coordinated with the dress or suit with skirt, Lady Diana’s own style.

Flashy and flashy: make-up and hairstyle

Definitely eye-catching, in the make-up of the 80s the eyes are the great protagonists. Underlined by brightly colored pencil and eyeshadow, applied both above and below, the make-up is blended outwards to obtain a “cat’s eye” effect.

Chosen in very intense shades, from fuchsia to coral, blush is the characteristic element that most emerges from these looks: precursor of the contouring we all know today, during the Eighties it was applied with generous brushstrokes on the cheekbones. The lips are lively and tinged with pink and orange tints. In this decade, the perfumed gloss is a must, while the range of shades of lipsticks is enriched with different shades including shiny and pearly textures. 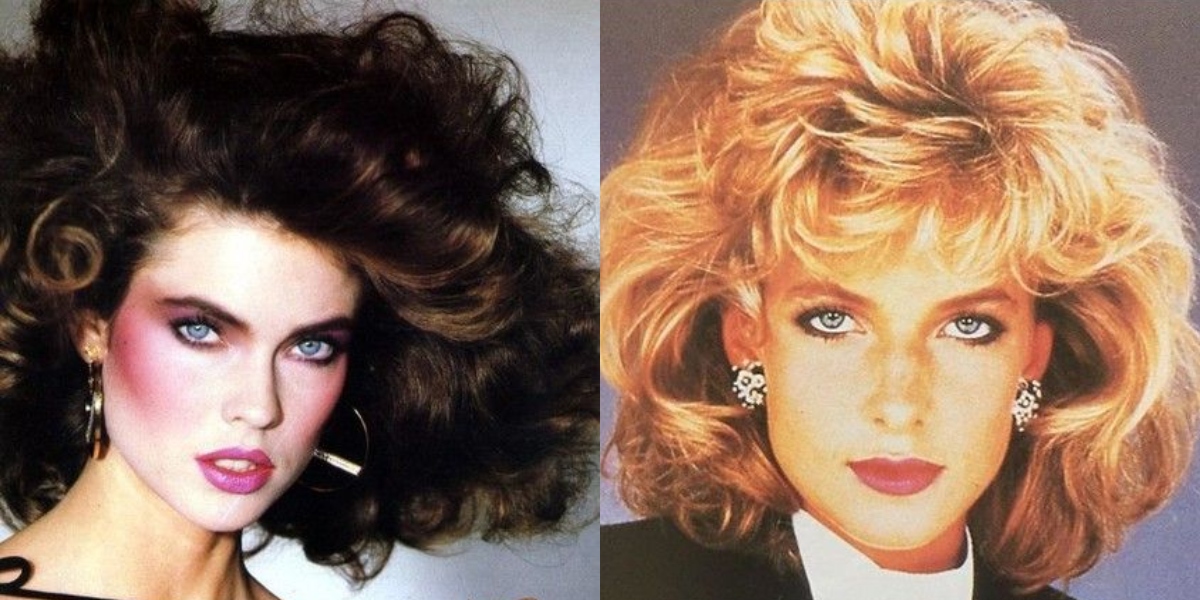 The make-u and the hairstyle of the 80s. Source: pinterest

In this decade the perm reigns supreme, becoming very popular alongside wild and exaggerated backcombing. The hair, long or short, had to be voluminous and cheeky. This is accompanied by the frisè, the unmistakable trademark of the Eighties, easily replicable thanks to the marketing of the first hair straighteners.

One of the most famous and reproduced haircuts of that era is undoubtedly the mullet: short in the front and left long in the back. Hair dyes are colorful and absolutely eccentric and showy because this is the age of extravagance, daring and playing by mixing different styles together.

The first streaks also appear very timidly (strictly blondes), which will explode as a hairstyle trend in the 90s. 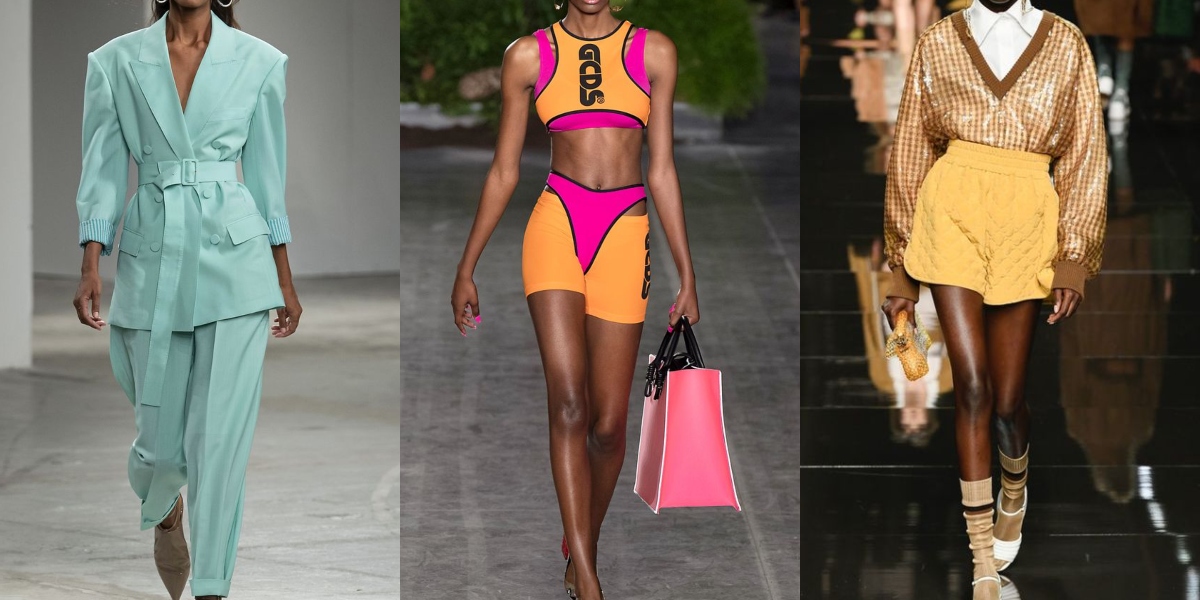 The fashion of the 80s on the catwalks of 2020. Source: pinterest

The fluo colors, the shoulder pads on the jackets and the casual style that blends with that of the gym have also influenced the 2020 collections. Agnona proposed one modern and avant-garde version of power dressing: today the volumes are decidedly softer and less rigid, the double-breasted jacket, taken from the male wardrobe, is a must, with the belt that emphasizes and highlights the waistline.

The athleisure trend continues to ride trends and the GCDS brand brings it back to the catwalk. Typical 80s fashion leg for briefs, resting on a pair of shorts with a cyclist cut, in the upper part the top takes up the models for gym training.

The preppy current, always formal and composed, is instead taken up by Fendi that revisits it by proposing a more sophisticated and updated concept. The classic white shirt is combined with a deep V-neck sweater in shiny fabric, while the shorts are high-waisted and wide.